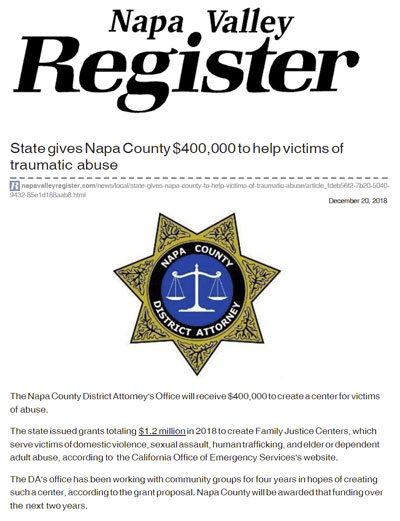 The Napa County District Attorney's Office will receive $400,000 to create a center for victims of abuse.

The DA's office has been working with community groups for four years in hopes of creating such a center, according to the grant proposal. Napa County will be awarded that funding over the next two years.

Victims who are served by the center could meet with employees of the DA's office, law enforcement officers, victim advocates, forensic interviewers, and workers in government and nonprofit organizations, according to a press release sent Wednesday.

The DA's Office said it reviews many allegations of abuse in Napa County each year. There were 501 domestic violence reports, six human trafficking reports, 26 elder abuse reports and 18 teen sex assault reports during the last fiscal year, which ended in June.

The center is expected to be housed in the Aldea Children and Family Services building on First Street in downtown Napa. Aldea staff would also work in the facility.

That site is near the county's Courage Center Program, which serves children who are victims of crimes, according to the release.

Having so many service providers work together would improve service for victims and ensure that their personal needs were met, the release said.

The DA's Office hopes to secure its first contract in January, said Nikki Lundeen, who aided in the grant process.