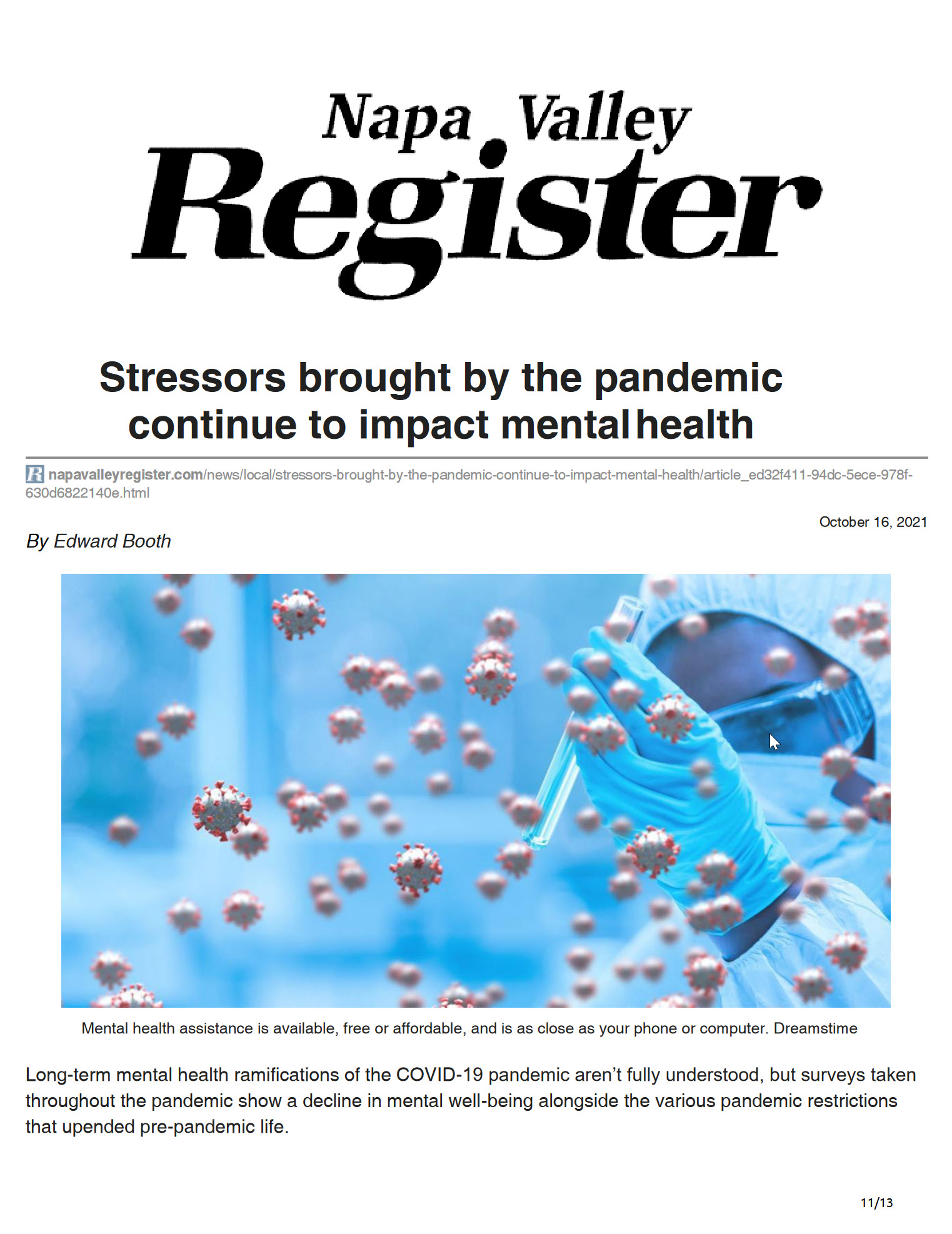 Long-term mental health ramifications of the COVID-19 pandemic aren’t fully understood, but surveys taken throughout the pandemic show a decline in mental well-being alongside the various pandemic restrictions that upended pre-pandemic life.

And many of those changes affected children in particular. According to a May report from the Kaiser Family Foundation, 31% of parents reported in an October 2020 survey that their child’s mental or emotional health was worse than before the pandemic.

Several pandemic-related changes played into instability: schools switched to distance learning throughout most of last year and parents also experienced significant stress, according to the report.

Social distance created by the pandemic also made it difficult for schools to recognize the need for mental health or substance abuse care in children, according to representatives from Aldea Children & Family Services, a Napa organization that treats both mental health and substance abuse in youth.

Laurette Lipman, program director of Behavioral Health Services at Aldea, said the nonprofit has received slightly more referrals for its mental health program — which treats children up to the age of 18 — during the pandemic. But that’s despite local schools teaching through distance learning for most of the pandemic.

“With COVID, our mental health program has stayed pretty consistent, which is kind of what you’d expect,” Lipman said. “If anything we’ve seen maybe more referrals, even without schools having in-person students to refer. Depression and ongoing anxiety would be your top two reasons for referral.”

Lipman added that Aldea’s substance abuse program — which serves ages 12 to 21 — has seen fewer referrals than usual throughout the pandemic. She attributed directly to the lack of in-person schooling and the absence of Aldea’s physical presence in Napa schools.

“With substance use, we’ve kind of seen the opposite trend. We’ve not seen as many referrals through COVID as in the past because they’re not getting caught,” Lipman said. “It doesn’t mean they’re not using, they’re just not being sent to us for treatment.”

But Aldea has been receiving a greater number of referrals for use of drugs other than cannabis and alcohol, according to Lipman.

“We’ve always treated moderate cannabis use,” Lipman said. “That’s the most common diagnosis, and alcohol uses second to that. But we’re seeing more intensity in experimenting with other drugs: LSD, opioids, and even fentanyl.”

Going back to school in August added to stress for some students, Ahearn said. She added that though distance learning resulted in isolation for many students, some students were happy to get away from the physical classroom. Many families with neurodivergent children in the United States chose to continue with remote learning this year, according to a report from EdSurge.

But, Lipman added, attending school in person has been beneficial to the mental health of most students.

“At that age they need peer relationships,” Lipman said. “Even if it’s, feeling safer to isolate, it’s not healthy to them.”

Paula Wadell, a child, and adolescent psychiatrist said during the panel it’s also important to recognize that mental wellness also operates on a continuum, with no clear line delineating when mental distress becomes a mental illness.

“If the air filled tomorrow with smoke, many people would have breathing problems, those with asthma would have even more,” Wadell said. “When we add a very significant stressor, everyone’s going to feel it, everyone’s going to move along the curve, and some people are actually going to move into the category where they have what we would diagnose as a significant disorder, and those with a disorder are typically going to experience worsening symptoms.”

In pre-pandemic years, Scher said, about 11% of Americans are typically experiencing significant symptoms of anxiety or depression at any given time. And during the pandemic, about 41% of residents are experiencing those symptoms.

Ahearn said that, generally, people should try to recognize the collective trauma brought by the pandemic and to therefore think of the change in people’s lives within the context of trauma-informed care — which she defined as the understanding that people experience and understand life differently.

“Everyone’s going through something you may not know about,” Lipman said.

Ahearn said one potential positive of the pandemic is a greater awareness of mental health. COVID-19, by affecting everyone in some sense, has also perhaps taught people to better understand the difficulty people have with depression or anxiety, she added.

“Everyone experiences things differently. Everyone has a different perspective on things,” Ahearn said. “Just having the awareness that we’re all going through a lot of change is important.”